We’re new to Owner Rez, can someone tell us the security deposit charge/refund procedure?
Is the deposit automatically charged?
Does the security deposit come to my account or is it some type of hold?
I set it up to “send the release reminder” 1 day after check out. When I get the reminder does it give me the option to charge against it and what if necessary?
Is it possible to see a screenshot from Tech support or someone else? Thanks 😊

Sure thing, some notes on secdeps:
- The built-in security deposit is a hold on the card like a hotel would do. It doesn't actually charge the amount.
- If you want to do a refundable secdep where you hold the money and refund it later, then turn off the built in secdeps and instead add a surcharge called "Refundable Security Deposit". That'll be charged at booking and then you can refund it later.
- If you had a merchant account the secdep would be authorized automatically. Since you only have PayPal right now, we can't do that -- PayPal doesn't allow us to keep cards on file. Instead, the Security Deposit Reminder will be sent to the guest with a link that lets them authorize the hold before arrival.
- When you get to the release area, you'll get a page that lets you release the whole thing or charge some. See screenshot. 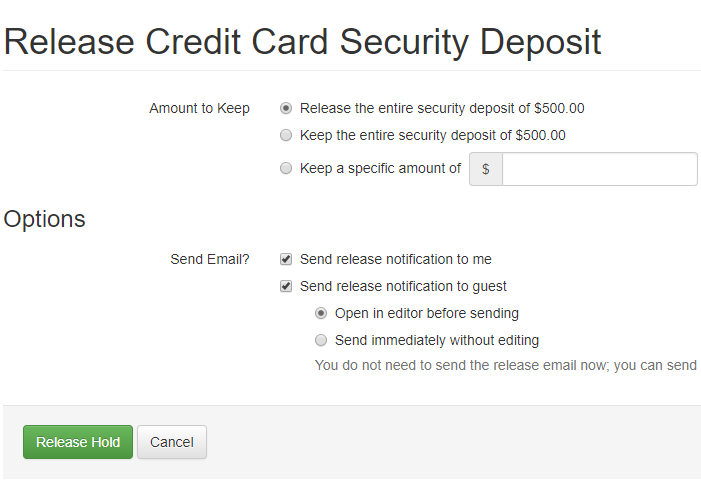