Possible to push only minimum night rates to VRBO?

I only want to update min nights, and I think I've manually changed some rates on VRBO, what's my best approach here? Do I first need to update the spot rates (nightly) to whatever is on vrbo and then overwrite them while adding in the min nights column?

If you are using Channel Bridge to push rates, it's all or nothing. There isn't a way to selectively push rates. Given that, your suggested approach is the best one - import spots, update your min nights, push out.

You might also find this easier using the Rate Calendar, under Tools. Generally it's best to make changes in OwnerRez, and then push from there.

I looked at the Rate Calendar and it looks like a pretty simplistic and maybe dangerous tool. I tried changing a single date's rate and found that it silently replaced my min nights with a default that's probably set somewhere. And then when I tried changing just the min nights and left the rate blank it silently changed the rate to zero. I can't imagine using a software implementation that doesn't alert me to making dumb changes like zeroing out rates.

There also doesn't seem to be any way to do bulk changes. So sure I could change a single date here or there, but I'm generally looking at changing a whole month's rates and that's much easier to do in a spreadsheet where I can still see that old rates while I create new rates, or use a formula to reduce all rates by 30%. Seems to me the Rate Calendar isn't very suitable, at least not from the perspective I'm coming from.

To answer your question, I don't really know if I'm using Channel Bridge to push rates. I don't think I am, I view channel bridge as the chrome extension only, and only for import. Is it used under the covers when I push spot rates back to VRBO?

Q2. If I've changed rates in VRBO is there a way to
a) sync rates and min nights from VRBO to OR, so that OR is an exact copy?
(update - I see in spot rates the ability to import from channel, does that overwrite spot rates? And for what period?)
b) and then export rates/min nights from OR to excel so that I have an accurate record in a spreadsheet?

Ultimately I need several things:
- accurate records of rates I've set in the past, so that in future years I have a good starting point.
- ability to bulk change rates and min nights, ideally by doing it with OR and pushing to vrbo and airbnb (at least)
- ability to quickly tweak rates and min nights fully within OR, but to not lose the ability to revert to spreadsheet import to OR then push
- work on varying time ranges. Sometimes I'm focused on just a given month, sometimes a season, and sometimes a year.

Actually, we do have the ability to import spot rates from an Excel spreadsheet, which might indeed be a lot easier for you. It's under Tools > Import/Export.

For the rest, I'm opening a ticket for you and we can work through it there.

@Rich, just wanted to let you know we've released an update to the rate calendar to make it more resilient. It'll now prepopulate with the existing values and only overwrite if you update them.

You can also use the range or column options to select a set of days and change them all at once.

We don't currently have an "increase x% option" but that's a great idea!

Thanks Chris - it's a huge improvement !!

What does the Toggle button do?

Very cool to be able to drag/select a full week and then update all rates together.

Toggle is a simple click to select a day, click to deselect a day. This is the default mode on mobile as range selection is tougher there.

Range selects a sequential range of days as you click and drag (default on non-mobile).

Columns selects a range based on day of the week as you click and drag, so you can select all Fridays and Saturdays in the month.

Range and Columns do work on mobile as well as desktop but they're a bit more fiddly than Toggle mode which is why Toggle is the default on mobile.

@Rich, just wanted to let you know we've released an update to the rate calendar to make it more resilient. It'll now prepopulate with the existing values and only overwrite if you update them.

You can also use the range or column options to select a set of days and change them all at once.

We don't currently have an "increase x% option" but that's a great idea!

Chris - I'm using the Rate Calendar today, the fixes are really nice! But I have found that when I update one particular set of dates, the prefilled nightly rates seem to be set from my last change instead of the current selected date.

If I reload the page everything resets, but looks like a bug to me.

- would be nice to be able to update min nites across a range without touching the rates. Maybe a checkbox could be added next to rates and min nights (default checked) which could be unchecked when someone only wants to update one and not the other

- would be awesome if there was a way to select a range and reduce rates by X percent. Especially for farther out dates, like the month of spring break, I have the relative rates set already, but I'd like to knock 10% off of them. That's hard to do when you have different rates set each week and sometimes (such as valentines day) uniquely per day.

I did some testing and I wasn't able to reproduce the issue with the wrong rates sticking in the box. Can you email over a screenshot of the first step where you set the rates and then the second where you're seeing the wrong rates?

You actually can update min nights without updating the rate. If you leave one of the boxes on set rates blank (or it has the prefilled greyed out range because there were multiple values in the range), then it will only update the one you enter. For example, see the screenshot below. That's showing that you've selected a range that's got multiple values for rate and min nights. If you just put a 4 in min nights and hit Update, it'll leave the rate as it is and only update min nights. 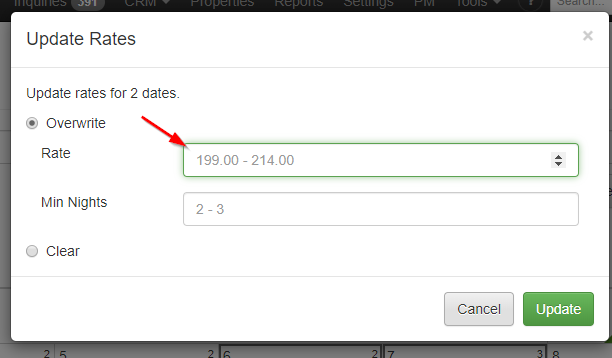 Updating rates by x% is a good idea! That could be another option we add to the modal. It's got Overwrite and Clear right now, we could add Adjust and let you enter x% to add or subtract.

Chris - I tested on my end and can't reproduce the problem any more. And as a bonus, the toggle button now seems to be working. Until today I couldn't figure out what it did, but now there is a clear boundary put around each date as they get selected.

Personally I don't like the 'toggle' label, it doesn't suggest to me what it's doing. Maybe it could be renamed to 'Multiple' ? Just a thought.

And thanks again, I spent a lot of time considering how to manage dates, and I eventually concluded it's just too confusing to keep up with spreadsheet versions as I make changes every few weeks.